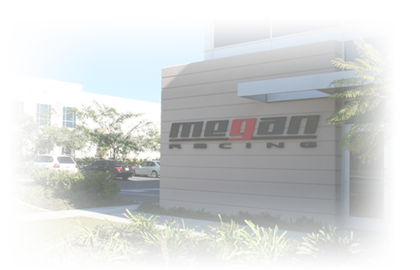 Since its inception in 2001, Megan Racing Inc. has always stuck with the same goals and principles that have carried its name throughout the years. Megan Racing was founded on the belief that the goal of the automotive enthusiast should not be limited by the size of ones wallet, but rather on their heart and passion for motor-sports. The spirit of competition has been around for the last century and continues to live within each enthusiast today. That same spirit led the founder of Megan Racing to seek out a way of manufacturing quality performance parts while having them affordable for the grassroots enthusiast.The Megan Racing staff prides itself on maintaining the original company goals of performance, design, and economical prices that will allow us to grow for many years to come.

This task was not a simple task—several obstacles had to be overcome. The first was sorting through a vast amount of factories offering parts at competitive prices, without sacrificing quality. Countless hours were spent in finding a competitive source that would not compromise quality.

By far the greatest obstacle faced by Megan Racing was the enthusiast community itself, with the common quote, “You get what you paid for” being ingrained in the minds of many racers. In many cases, this is true, but the goal of Megan Racing was to prove otherwise. Megan Racing believes a well-designed and developed product did not have to have a high-profit margin; rather, it simply needed to function as intended to gain the trust of the grassroots enthusiast. As the community began to bestow trust into Megan Racing, the product line grew as a result.

As any track-driver can tell you, the rigors of a race day will push the limits of both the driver as well as the machine, and this is where we vow to be with you through the performance and quality of our products. Over time, Megan Racing has been able to develop a broad product line touching the most important aspects of performance. Each product is tested vigorously in our in-house facilities and in controlled-variable scenarios. Taking one step further, Megan Racing knew that community input was the final key to developing the perfect product. Seeking out the most active members of the racing community who offered both real-world as well as on-track testing, Megan Racing maintains its key interest to keep the community involved in every aspect of the development, testing and production of each product.

Over time, through sponsorship of individual drivers, teams and competition organizers, Megan Racing has kept a deep involvement with the racing community to receive feedback from the community first-hand and have developed a strong bond with our family of enthusiasts who bear our logo on the track and on the street. Many enthusiasts are aware of our development team by name through providing track-side support at many track events and many garages across the country. Each and every day our staff and development team corresponds with our sponsored drivers to ensure that our products have kept them on the podium not just the first time, but every time.

As Megan Racing kept growing over the years, we have incorporated the ideas and concepts of automotive enthusiasts across the world and have developed many performance parts for hard-to-find applications. Megan Racing knows that a true automotive enthusiasts sees potential in almost every car on the road, and with that we have developed parts for over 100 different applications in various makes and models, both Domestic and Imported.

In 2004, several of the Megan Racing staff attended a drift event for the first time. It was at that moment where we found our calling; this new and unconventional driving style had caught our attention as it necessitated the precise driver skill needed for a road course with the finesse of an off-road rally car. We knew we had to get behind the wheel and try this for ourselves. At the beginning of the next year, we had built two Rear-Wheel drive competition cars that were found burning rubber almost every weekend to test and tune our vehicles and products. Many set-backs were experienced during this time—nothing is ever perfect, but we walked away with many lessons learned and more importantly, we connected with the drift community on a much deeper level. Our community involvement let us to taking in advice and criticism from some of the best drivers in the United States and Japan. These lessons have led to our several competition cars producing over 600RWHP as well as various demo-cars to promote at various events across the country.

The economic downturn in 2007 caused many changes in the automotive industry, forcing several name-brand manufacturers out of business and many more retail shops to do the same. Difficult times called for immediate action and Megan Racing had decided for a company restructuring without compromising the quality we had maintained over the years. Focusing on company growth, Megan Racing relocated to a larger warehouse and office to jumpstart our operations to combat the economic crisis faced by manufacturing companies throughout the automotive industry. The risks taken proved to be worth-while as our development, sales and customer support staff expanded to further our operations in the administrative and development side of our company to better serve the customers as we have increased productivity and logistics to ensure our products would continue to encompass the globe.

It is now 2010 and Megan Racing has become one of the leading manufacturers of aftermarket performance parts across the United States and continues to expand globally. Foreseeing our tenth year in existence, Megan Racing has vowed to never forget our roots and the many great people we have met in many different countries. We consider ourselves to be extremely fortunate to have been where we have been, seen what we have seen, and met who we have met. Most importantly, we wholeheartedly feel that we are involved in the greatest community that has every existed—the automotive community.

Continuing to give back to the same community that has provided us with the success that brings us to where we are today, we held our first ever Megan Racing Drift Challenge in 2009 where we accommodated to top Pro-Am Drivers across the nation as they competed in a safe venue for $3,500 in prize money. The event proved to be a success from the many thanks and supporters we received from hosting the event, and we decided that it would be the first of many to come. Drifting is an amazing sport and we are sure that it is here to stay and Megan Racing will be there every step of the way, growing with the community and providing a safe environment for drivers by sponsoring or providing a venue.

As we’ve grown, we have found that our growth has presented us with more opportunities that we can carry on to our customers. We’ve been able to work with the newest factories and more competitive sources that allow us to remain at the forefront of production technology. Everything from stronger and lighter materials to even new techniques in welding has given us a leading edge over competing manufacturers. Our materials are sourced from both domestic and imported origins such as the Japanese steel that we use in many of our applications such as our Lowering Springs and our Stainless-Steel exhaust products. We are constantly on the lookout for more efficient and higher quality manufacturing methods so that we can make even our most tried and true products even better for years to come. Furthermore, with that mindset, we have always stood by our products by extending our warranties so you can rest assured, knowing that we are there for you.